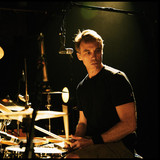 Whether he's a full-time member of a band, a hired gun, part of a side project, or a special guest, Matt Cameron is unquestionably one of rock's finest and most versatile drummers. Matthew D. Cameron was born on November 28, 1962 in San Diego, California, taking up drums at the age of nine, and landing the lead vocals on the song "Puberty Love" for the '70s cult classic flick Attack of the Killer Tomatoes. After relocating to Seattle, Washington in the early '80s, Cameron joined the band Skin Yard, appearing on their self-titled debut. But by the time of the album's 1987 release, he had already moved on to another up-and-coming Seattle band, Soundgarden. With the late-'80s heavy metal scene comprised of either unbearable glam metal or one-dimensional thrash metal, Soundgarden returned metal to its earthy Sabbath/Zeppelin roots, and spiked it with punk's aggression. The band put out several independent releases (the EPs Screaming Life and Fopp on Sub Pop, plus the full-length Ultramega OK on SST), and created quite a buzz in both the metal and alternative communities. A&M Records signed the band, issuing a string of classic releases -- 1989's Louder Than Love, 1991's Badmotorfinger, and 1994's Superunknown -- which saw Soundgarden become one of rock's biggest bands, as they were one of the leaders of the early-'90s "Seattle Explosion" (along with Nirvana, Pearl Jam, Alice in Chains, etc.). Cameron also found the time to appear on a variety of other artists' recordings/side projects (Tone Dogs' Ankety Low Day, Temple of the Dog's self-titled debut, Hater's self-titled debut, Eleven's Thunk), as well as lending his drumming talents to Pearl Jam's original demos. Surprisingly, Soundgarden decided to call it quits in 1997 at the apex of their commercial success (just off a co-headlining slot of Lollapalooza and their best-selling release Down on the Upside). Cameron kept himself busy with a band that began as a side project but then became a full-time proposition, Wellwater Conspiracy. While the group (whose sound was a conglomeration of lo-fi alt-rock and such '60s sounds as garage rock, psychedelia, and mod) would employ various musicians on their albums (1997's Declaration of Conformity, 1999's Brotherhood of Electric, and 2001's The Scroll and Its Combinations), Cameron and ex-Monster Magnet guitarist John McBain would serve as the band's core. In addition, Cameron joined his pals in Pearl Jam when their drummer, Jack Irons, had to bow out for health reasons, resulting in several world tours with the group and appearing on their 2000 release, Binaural (as well as their concert DVD Touring Band 2000, which contained a special "Matt cam" added feature). Somehow, Cameron also found the time in his busy schedule to guest on solo releases by Rush's Geddy Lee (My Favorite Headache) and Tony Iommi (Iommi). In 2010, Cameron joined Soundgarden for the long-dormant band's reunion, playing a comeback show that March in Seattle and headlining Lollapalooza that August. Two years later, he was also on board for the band's sixth studio album, King Animal. The following year, he delivered Drumgasm, a collaboration with noted rock drummers Janet Weiss (Wild Flag, Quasi, Sleater-Kinney), and Zach Hill (Hella, Death Grips). Also in 2013, he played on Pearl Jam's tenth studio-effort, Lightning Bolt. Over the next few years, Cameron stayed busy touring with both Pearl Jam and Soundgarden. He also began work on what would be his first ever solo recording. Tragically, on May 18, 2017, he was on tour with Soundgarden when lead singer Chris Cornell was found dead in a hotel room after the band's show at Detroit's Fox Theater. Subsequently, the band canceled the rest of the tour and suspended any future plans. In the wake of Cornell's death, Cameron returned to his burgeoning solo work and in November 2017 released his debut album, Cavedweller. For the album, Cameron took on singing, songwriting, and guitar duties with fellow David Bowie Blackstar-alums drummer Mark Guiliana and bassist Tim Lefebvre joining him. ~ Greg Prato, Rovi