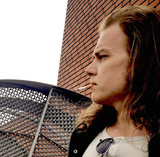 Danish-born singer-songwriter of Romani descent, playing mellow tunes with soulful lyrics.   Genre-wise, David’s music usually lies within the spectrum of soft rock, but it often includes traits of various other genres, primarily folk rock, country and blues.   While he plays a handful of instruments, most of his work is accompanied by an acoustic guitar and/or piano.   In April 2018, David released his debut EP “Old, New, Borrowed & Blue”, consisting of five songs all of which has love as a central topic.   His second release, “Drunken Heartache”, came in November 2018, and contains three songs. This record has a more raw and unpolished vibe, a bluesier sound and (as the title suggests) a far less rosy depiction of his love life.   Over the years, his inspiration has come from a line of different artists, but a few stand out as having had the biggest impact on David’s style and personality – these artists are Glen Hansard, Kurt Cobain, as well as the early material of Danish singer-songwriter Christian Brøns. In recent years, Willie Nelson and blues legend Lightnin’ Hopkins have also been among his sources of inspiration.   “Music and poetry have always been two of my greatest passions, and with a strong emphasis on lyrics that honestly and in a down-to-earth fashion communicate my emotions, I hope to touch people’s hearts, and maybe add to their personal soundtracks for the ups and downs of their lives.”