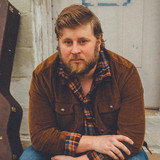 Born and raised in Paradise, California, Nate Smith found his love for music at a very young age. From elementary musicals to high school garage bands, he spent his adolescent years developing his craft. Among influences such as Elvis, Garth Brooks, Bob Seger, Tom Petty and Fleetwood Mac, Nate credits his time spent as a worship leader as his biggest musical inspiration. At twenty-three, Nate made his way to Nashville, signing a development deal with Word Records and a publishing deal with Centricity. After a series of personal trials, Nate made the gut-wrenching decision to move back to California to be with his family. When a devastating fire struck the town of Paradise and destroyed everything he owned, Nate moved back in with his father. He began writing again and released his hit ‘One of These Days.’ The song went viral and drew attention from local and national media outlets. This small taste of success inspired Nate to move back to Nashville and continue his dream of being a country music star. Nate lived out of his car for over a month, writing music and playing dive bars as he drove across the country. After arriving in Music City, Nate released his biggest single to date, ‘Wildfire.’ The song symbolizes love and hope in the midst of tribulation. The song went viral on TikTok and Nate has since signed a publishing deal with Sony ATV and a management deal with Simon Tikhman and Chief Zaruk of The Core Entertainment.