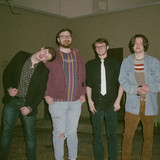 Hailing from Rochester, New York, The Stone Lows are comprised of singer/guitarist/keyboardist Liam James Welch, bassist Henry O’Brien, guitarist Edward McAndrew, and Alexander Klick on drums. At a glance, The Stone Lows are a band that seem to relish the idea of never creating the same music twice. The group made their first dent in the scene with their debut album, Oceans Apart, in 2018.

With a lineup from the band’s earlier stages of development consisting of just Welch, O’Brien, and Klick, Oceans Apart proved to be a refined take of a collection of songs borne out of highschool jamming from the trio. Self-recorded and produced by Welch in a basement, armed with nothing but an eight track mixer and a couple of microphones, the record gave the group their rough-around-the-edges, angsty, dramatic and psychedelically manic alternative rock sound.