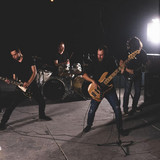 The roots of BLEAK REVELATION can be traced back to the early 2011, when Alexander Dimitrov (lead guitars) found some musicians who shared the same love for bands like October Tide, In Mourning, Novembers Doom, Opeth, Katatonia, Paradise Lost and My Dying Bride. The four-piece outfit recorded, edited and mixed their self-titled demo in August/September and released it in Fall 2013. This was followed by series of live gigs that caught the attention of the local audience. After those shows BLEAK REVELATION teamed up with the Belgian producer Déhà (Clouds, Imber Luminis, Deos, Maladie, Slow, etc.) and recorded their debut single Defied By Clouds in June 2014 at his Opus Magnum Studio. It was followed by the full-length Afflictive Seclusion (again produced by Déhà), released in March, 2015. The album has gotten positive reviews by local and foreign media. Pre-COVID time, BLEAK REVELATION were regularly performing live in their home country and have managed to share the stage with bands like Ophis (DE), Eye Of Solitude (GB), Evadne (ES), Negura Bunget (RO), Frostmoon Eclipse (IT) etc. In 2019, BLEAK REVELATION entered the studio once again. Collapse was recorded, mixed and mastered by Ivo Ivanov (Mrdr Sound Studio) and Maxim Goranov (Max Sound Studio) and will be released September 22, 2020.