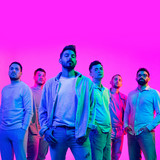 With a fresh mix of Maltese lyrics added on top of pop influenced music, The Travellers launched their debut Single ‘Sempliċità’ in 2016 which topped the charts immediately, gaining attention from multiple local stations. The catchy tunes and punching brass lines did the lyric lines justice in interpreting a well needed, refreshingly different sound. Since the inception of the Travellers, the band has released their debut EP, including 5 original Maltese tracks, from which three singles were launched (‘Sempliċità’, ‘Dak li Int’ and ‘Xemx u Xita’), all of which have topped local charts on both radios and the PRS. Their debut album, ‘Iljuni fis-silġ’ hints towards a more refined sound and the title itself reflects on the versatility and different identities that each song gives to the album. Even the brass section itself is frequently used in a more rhythmic and more dance-influenced manner; in contrast to their EP ‘Xemx u Xita’. Their last two singles ‘Ħafi Paċi Kuluri’ and ‘Ilkoll flimkien’, are also featured in the album.   Clayton (Bassist), Joseph (Trumpet), Chris (Main Vocals) and Andrew (Guitarist), were the original members who started playing together, while, Sylvano (Saxophone) and Michael (Drummer) joined the rest of the band later on in 2013. With contrasting influences from brit-pop to reggae, punk to dance music, the band was more than well equipped to bring the edgy, pop sound we are familiar with.