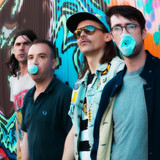 Formed in 2004, Brooklyn's Weird Owl have a sound that falls somewhere between the overblown excursions of fellow Brooklynites Oneida and the spacy, exploratory riffing of Black Mountain. The band has carved out a sound of its own, combining the influence of psych rock pioneers 13th Floor Elevators and the introspective vocal style of Neil Young. The result is a sound that layers warm fuzz and laconic, swirling synthesizers to create neo-psych that manages to feel experimental while harking back to a time when album-oriented rock was king and monolithic riffs roamed the Earth. In February of 2009 Weird Owl released Ever the Silver Cord Be Loosed on TeePee Records. Two years later the band returned with Build Your Beast a Fire, a slow-burning set recorded with Dinosaur Jr. producer Justin Pizzoferrato. For 2013's mini album Healing, Weird Owl adopted a lighter, more spacious approach, as well as a new label (A Recordings, the imprint of Brian Jonestown Massacre's Anton Newcombe). Continuing with their gentler psych approach, they returned in 2015 with the full-length Interstellar Skeletal. ~ Gregory Heaney, Rovi