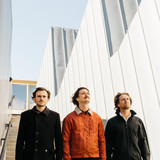 Art vs. Science are an Australian trio whose rough and ready dance-pop initially compared favorably to acts like Electric Six, Justice, and Junior Senior.

Their first two singles, the Basement Jaxx-esque "Flippers" and Justice-meets-hair-metal "Hollywood," began to get some buzz on local Australian radio stations; spurred, perhaps, by the growing hype and the success of their live shows, the band wasted no time in laying down tracks for their self-titled debut EP. Released independently in May 2009, the EP featured two more hits for the band: Friend In The Field and Parlez Vous Francais, both of which featured in Triple J’s Hottest 100 2009 (#96 and #2 respectively). Magic Fountain blew up on radio and placed #9 in that the Triple J Hottest 100 of 2010, netting them a top ten song two years in a row. The band's debut LP, The Experiment, was released early 2011, peaking at number two on the Australian charts, an ARIA award for Best Independent Release.