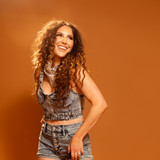 A cowgirl boot with a stiletto heel - Katie Austin's music is a blend of her small-town roots in Louisiana and her love of the music city lights! Whether she's performing one of her high-energy, boot-stomping songs or serenading you with a bone-chilling melody, she has a musical identity that is genuine and found in all the songs she writes. Her career has included opening for acts such as Big and Rich, Joe Nichols, Rodney Atkins, Collin Raye, Chris Young, and many more during her two-year headlining gig at the famous Cowboys Dance Hall venues. She’s toured on Carnival Cruise lines ships and has landed several finalist spots in national contests such as Top 5 in the “Folger’s Coffee Jingle Contest”, Top 10 in the “Nash Next” competition affiliated with NASH FM, Big Machine Label Group and Cumulus Media,

and “Battle for the Saddle” at Nashville’s Wildhorse Saloon. Her latest EP “Wild Child” landed at the No.42 spot on the iTunes country album charts. The music video for “Got Me Like”, a track from the EP, was premiered on CMT Music and earned the #3 spot on their CMT 12 Pack Countdown. In 2021, Austin is gearing up to release new music as well as lean into her new role as a television co-host on the Sportsman Channel show, The Most Wanted List. In the meantime, all of Katie’s previous work and releases can be found on iTunes, Spotify, and most other digital retailers and platforms.