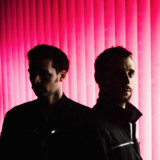 POLY POLY is a musical spacecraft hovering through synthesized galaxies of Funk, Neo Soul and Beat Art.It’s maneuvered by earth based producers and instrumentalists Hans Heusterberg and Jona Raischl, who got together over a shared weekend of music making in early summer of 2017: Although hailing from the same city, it took them a flight to a music workshop in Berlin to get to know each other.This short trip turned out to be the beginning of a long journey through musical galaxies. It culminated in the release of their self-titled debut album Poly Poly on Bumm Clack Records, which captured the interplay between their respective musical backgrounds. While Hans „Hans Hu$tle" Heusterberg focuses on detailed and colorful productions somewhere between experimental R&B, smooth Neo Soul and deep Trip Hop, Jona aka „Volt Age“ delves deep into the realm of electronic sounds and embraces the cheesiness of retrofuturistic neon-drenched Synthwave, fueled by analog synths and nostalgia.