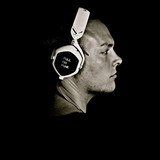 Techno DJ/Producer from Amsterdam determined to make a difference in the scene. In all his productions and sets you’ll hear a refreshing mixture of Techno & Progressive House, all with a funky twist. Besides putting in the effort to be refreshing behind the decks, he also tries to make a difference for many others out there by running Techno platform 50:HERTZ.”

The “Full On” Story... Techno DJ/Producer From the Netherlands determined to make a difference in the scene. “Funk” in his style of Techno stands for combining different genres and bringing it all together to form a new sound which he calls “Progressive Funky Techno”. A fresh mixture of the firm grooves of Techno with the euphoric melodics from Progressive House topped off with cheeky groove elements from Funky House. “Full On” refers to high energy levels in his productions and sets. He’s set on accomplishing his goals not only by creating music with a twist but also by giving back to the scene in many ways with the 50:HERTZ community which he co-founded in 2016. “You got to believe in an idea, Work hard and it will become a reality” Labels: Funk’n Deep // Boiler Underground // Sounds R Us