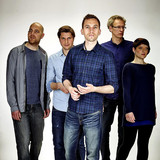 In its music the M.Borgard Band combines the tale telling element of warm folk-pop music with catchy melodies. The inspiration for his emotional and authentic lyrics M.Borgard draws both from his own experience and partly from impressions of his surroundings and made-up stories. The new EP entitled GOLDEN released in June 2021 contains five new original songs that yet again demonstrate the variety of music genres the M.Borgard Band likes to live out. Singer-/Songwriter M.Borgard has been performing on stages in and around Cologne since 2008. In 2012 he released his first album entitled "love, again". Eleven original songs about love, sorrow and joy. In 2013 the German-born singer got together with four talented musicians to form the M.Borgard Band. In its musical career of performing live, the M.Borgard Band has been asked to play as opening act by a bunch of famous and esteemed artists and bands, such as Sunset Sons, Gabriella Cilmi, The Night Game, The Lone Bellow, Luke Sital-Singh, Kristoffer and the harbour heads and many more... After having had numerous performances on concerts and festivals since, the M.Borgard Band released its debut album as a group in 2015. The record is called "The light" and contains 15 elaborately composed songs. In the year 2020 the Band released the 4-songs-EP named PINEAPPLE holding new elaborate originals. All of the music of "love, again",

"The light", "Pineapple" and "Golden" is available on several online streaming platforms.