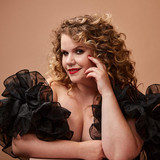 Dutch singer-songwriter Iris Kroes, born November 11 1992, always performed as a singer, but her big break came in 2012 when she became the winner of The Voice of Holland, season 2. A striking winner, cause she was the first one worldwide ever in a TV show who uses a harp in combination with her singing. Iris’ debut album called ‘First’ and was in the top charts for more than 6 weeks. She toured with Marco Borsato, in the big venues in The Netherlands. She was the winner of the 3FM Dutch Harp Award. In 2014 she released her EP ‘It will come in time’ with own written songs. Fall 2015 she released her own Christmas Album called 'Christmas Feelings'. In 2014 & 2016 Iris toured in the theatres with the shows ‘Thús’ & ‘Irisistible’. Since 2014 Iris is touring with her #IrisCruise tour worldwide.

In 2018 she’s back releasing new music for projects, European Culture Capital of 2018, The Olympics & Moving out process. Her album 'No Fire' is released in fall 2019. All music is released by herself, songs all written right from the heart. Together with singer Heleen, Iris Kroes had the scoop of releasing the first Dutch 8D-Audio song 'Brighter Day'. Iris quote; 'Don't call it a dream, call it a plan'.