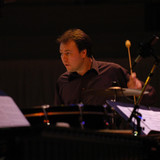 Formed in 1991 by Artistic Director Tim Williams, Psappha specialises in the performance of work by living composers and in music of the 20th and 21st centuries. Psappha has an extensive and varied repertoire of hundreds of works and a reputation for technical assurance and interpretive flair. Sir Peter Maxell Davies was Psappha's Patron for 20 years until his death in March 2016 and the ensemble's inspiration. Psappha gave a special 80th birthday concert for Max in Manchester in 2014 and has performed much of his chamber repertoire including the award-winning music-theatre work Mr Emmet Takes a Walk which he wrote for Psappha in 2000. Psappha has appeared throughout the UK, featuring regularly at most of the country's major music festivals and has made highly successful tours to North and South America, Australia, and throughout Europe, also appearing in the United States and Hong Kong through residencies at Princeton University and the Hong Kong Academy for Performing Arts. Most recently Psappha toured to the Jerusalem Festival in June 2017. Psappha continually seeks to develop new audiences and break fresh ground. Through its websites Psappha provides more than 200 free-to-view films of live performances. The ensemble's YouTube Channel had over 101,000 views in the last 12 months making Psappha one of Europe's leading providers of new music online.