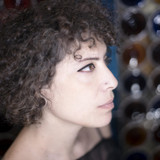 Italian singer, songwriter and composer Susanna La Polla De Giovanni became known in the early 90s under the moniker Suz as a backup singer and vocalist for the pioneer of Italian ragamuffin Papa Ricky. In the 2000s alongside producer Ezra and bass player Alessio Argenteri (both already members of the seminal italian band Casino Royale) she then landed to an elegant triphop with the albums "Shape of Fear and Bravery" (2009, No.Mad Records), "One Is a Crowd" (2013, No.Mad Records) and "Lacework" (2015, Irma Records). After performing live in major Italian cities, she served as opening act for numerous artists including Daddy G (Massive Attack), Roni Size, Asian Dub Foundation and Ghostpoet, playing in Germany, Switzerland, England, Scotland, France, Ukraine, Japan, and taking part in the Eat Festival in Leipzig, the Reeperbahn Festival in Hamburg and the World Music Concert in Hamamatsu as a representative of Bologna City of Music UNESCO. In 2014, together with prominent musicians of the new italian jazz scene Valerio Pontrandolfo, Nico Menci, Bruno Briscik and Marco Frattini, she founded a 5et exploring the jazz side of her music sensibility. In 2019, she co-wrote with tunisian producer Obsqure