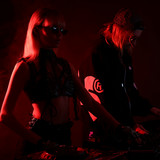 Originally from Paris, French electronic duo Kill the void transcend genres with their hybrid techno, an industrial-tinged, cosmic trip gently wrapped in a sinister universe. The duo formed by Ella Hox and Ash Oskyler create its own DNA at a crossroads by drawing its influences from different genres such as Detroit Techno, Acid, Dubstep and EBM including references for several innovative groups such as Kraftwerk. Embracing a certain attraction for science fiction, cosmic horror and video games, the French producers bring atmospheric and cinematic writing into their tracks to create immersive visual music. Composers such as Vangelis or John Carpenter are among their main references. Coming to life in 2020 during the pandemic, the duo will wait 2021 to take its first steps as a producer with their first EP Cult of Tau released under the UK label Dance Trax. Composed of 3 tracks, this sinister techno-cosmic and conceptual journey, propelled with strong doses of industrial elements and psychotic synths, offers a mixture of genres oscillating between convulsion and cinematographic poetry and confirms the duo's unique style. Under Kill the Void universe, robotics reign supreme and haunts the narration. The visceral compositions with alienating sound textures confront the frenzy of men with the fury of machines. A love-hate relationship driven by the desire to leave a strong emotional imprint.