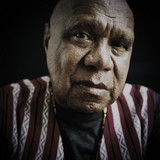 Archie Roach has been making music since 1990, and along the journey has received many accolades including a Member Of The Order Of Australia (AM), a Human Rights Achievement Award, five ARIAs, and an APRA Lifetime Achievement award. He has shared the stage with Patti Smith, Paul Simon, Joan Armatrading, Rodriguez and the late, great Leonard Cohen. In 2019 Archie has released his highly-anticipated memoir, Tell Me Why. It is the story of how one man’s struggle to find his identity, family, and sense of belonging ultimately led him to narrate his journey through words and song, to go on to perform on stages across the world. He spends his time singing, mentoring, and re-connecting to the things which he has lost or had taken from him. 2020 promises much for him as he edges gracefully into his mid-60’s. It could just be his biggest year yet, both at home and on the world stage.