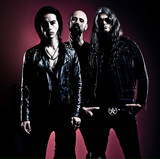 „You must have chaos within you, to give birth to a dancing star” (Friedrich Nietzsche)   Without chaos, there's no creativity–and both are the driving force behind every adventure. Adventures that LACRIMAS PROFUNDERE have experienced in 30 countries, far away from LA’s dazzling theatres. Starting 1993 as death-doom band, they went the gothic route over time. Their 2004 album AVE END paved the way for the subsequent album FILTHY NOTES, which is considered a personal milestone also noticed by JACKASS star BAM MARGERA, who covered “And God’s Ocean” , as did ALISSA WHITE-GLUZ. With THE GRANDIOSE NOWHERE they toured South America and China, ANTIADORE enabled their first World Tour, and in 2016 it was time for their first concept album HOPE IS HERE, which immediately reached #30 of GERMAN CHARTS. But, as Isaac Newton put it: "What goes up,must come down”. With problems bubbling under the surface, Oliver realized that in order for the band to live, it had to be killed first. To rise from the ashes also meant to find a new vocalist: Julian Larre. The big bang theory states that matter, space and time emerged 13,8 billion years ago from a primordial singularity, an infinitely small point. So why do we plan every minute of our lives, why do we wonder about every step we take? Everything that counts might be the freedom to feel and to think. BLEEDING THE STARS invites you to let go, to make you realize that everything ends, and that nothing is as important as it seems.