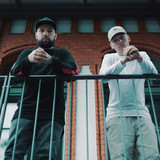 TLLDWN is a producer duo from Munich, Germany consisting of Heartbeatz and Capital P. The duo first started collaborating in August 2015. Hundreds of studio sessions and endless nights later they decided to form the Duo TLLDWN, pronounced Till Dawn, in January 2018. Their sound ranges from complex and big arrangements, dark, harmonic and deep sounding melodies to hard hitting and heavily 808 influenced trap drums. Listening to TLLDWN will get you caught up in a vibe similar to 6lack, The Weeknd and They.