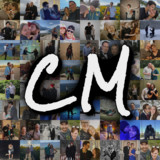 Born in Edmonton in 1997, singer-songwriter and multi-intstrumentalist Cole Merkosky has always had music as a part of his life. Growing up, he was surrounded by family that lived and breathed music. You could always hear a piano playing in the Merkosky home, and family reunions weren't complete without fiddles and guitars. Over the years, in church choirs, school bands, and just messing around at home, he eventually picked up guitar, piano, bass, drums, and trombone. Towards the end of high school and into his first few years at the University of Alberta, where he studied computing science, he honed his talent for songwriting. When the opportunity presented itself to gain some experience recording music, he jumped at the chance. In the latter part of 2017 and the start of 2018, he wrote, recorded and produced his debut EP, Mythic, all from his bedroom studio in North Edmonton. It was released on February 25, 2018. After realizing that he enjoyed the production side of music making, he immediately started plans for his next project. He envisioned a grand full-length album that featured a cohesive plot and heightened production values. Over the next two years, he wrote countless songs, eventually narrowing them down to 12. These songs were featured on his latest album, The Good Fight, released on September 25, 2020