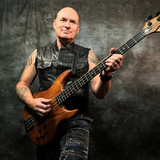 Tod Almond Is Back! It's been 1 year since Tod released his first album 'If Only You Could See'. An album described as drawing inspiration from Classic Rock and Punk, with sounds that compliment both, but belongs to neither. Full of catchy songs with similarities from the past, yet with a fresh modern newness. Half the songs from this album collected 5 star commended awards from the UK Songwriting Competition, Interviews and features in magazines, Radio Stations, some great reviews. All that said! It may have been a year since Tod's last release, but Tod is back with his next Single. A title that says it all. Let's Party! A song which many people would full heartedly agree with this Christmas. Described as wanting to get out and party in the streets, pubs, venues, everywhere to release all that's built up inside. Let's Party is full of energy, catchy riffs, melodies and vocals telling people to 'Enjoy life that your living' 'To look forward to your future' 'To have fun' You can't help tapping, dancing, even jumping, AND singing along of course. “Catchy music? I couldn't have it any other way” Let's party has much to say and you can tell Tod has had a whole load of fun creating this masterpiece. SO “Laaaa lala la.....Let's Party” Tod Almond is a Singer Songwriter Born Boston UK. Write's Classic Rock Infused Punk Songs.