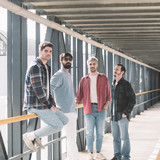 Since their formation in late 2016 Pale Oaks have never been concerned with being the cool band in town. Where other bands are quick to shy away from being labeled “emo” or “pop”, the members of the Greek quartet wear their influences proudly on their sleeves. Combining the down-tuned guitars and melodies of mid-’00s emo, with 80’s synths and big pop hooks, they jokingly started calling their music “heavy-pop” until the term stuck. In their time together the band have toured Europe, released their well-received debut EP “…I’ve Been Better” and the stand-alone single “Losing Our Minds” before entering the studio in late 2018 to start recording what would become their debut LP “Falter”.

The album sees the band pushing their sound even further creating a body of work that is meant to be listened to like the mixtapes they used to make as kids, where track order and vibe were more important than genre. Straight up guitar-driven rock songs give their turn to euphoric pop choruses, electronic drums, pitched vocals and glitchy lo-fi loops to create a collage of sounds that keeps things thrillingly unpredictable.