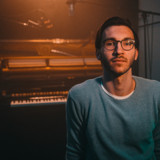 Michael Frankenberger is an award-winning film composer and musician born in Salzburg (Austria), known for his work on "We Shall Not Die Now", "Salzburg. Eine Kunstgeschichte", "Bang on Time" and his solo albums "In Silentio" & "Dreams". The Music for "We Shall Not Die Now" was composed in collaboration with Ashton Gleckman and Golden Globe, Emmy & Grammy nominated composer Benjamin Wallfisch (Blade Runner 2049, Shazam, IT). For his work Michael was rewarded with a placement in the prestigious Forbes 30 under 30 List in 2020 powered by Forbes Dach. Next to Michael the list is full of well-known entrepreneurs, athletes and artists. In 2020 Michael has founded @CineCave, a music licensing platform focusing on high-end cinematic music. Michael has already worked for a wide range of companies as freelance composer including Hans Zimmer's Extreme Music / Bleeding Fingers Custom Music Shop and Gothic Storm Musi. Furthermore, he also completed an internship at Hans Zimmer's Remote Control Productions in Los Angeles. Since 2017 Michael had the chance to work on several Projects including Feature Films, TV Series, Shortfilms, Library Music and Concert Music. He has written the music for "We Shall Not Die Now" (Documentary), "Salzburg. Brauchtum im Herzen", "The Hills I Call Home" (Documentary) and Gracemarch" (Pilot Episode) by "Game of Thrones" actor Ross O'Hennessy.