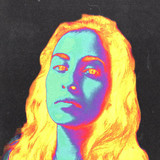 LVA aka THE ONE LAVIC was born in Cali, Colombia & spent her childhood between there, Southern California, and Southeastern Florida where, immersed in the sounds and culture of the world around her, she began her creative journey. Her first medium was paper and canvas - expressing herself visually in abstract and expressionistic pieces that often explode with color and are, at once, grounded in form.   Years later, she moved to South Carolina and met videographer, Phoebe Wabbington - who worked closely on projects with hip hop producer, Dame Grease. Through this group, LVA learned several facets of the music business - including videography, design, and marketing. Already a visual artist, she took video editing easily.   As TOL now begins her life as a musician, she brings with her the rich and prolific background of a developed artist as well as the technical understanding of music production, engineering. Her experiences and worldview have converged with her passion over a myriad of soundscapes. TOL isn’t a jazz or R&B singer. Nor is she a videographer or a painter. She is an artist at her essence - unbound to medium and fervently dedicated to declaring her voice - not as just an artist, but as a mother, a lover, a friend, a woman, a revolutionary, and a survivor. -sympL writer, mcee, tour manager and host for DROPP Science