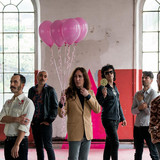 Along with Marlene Kuntz and C.S.I., Afterhours were the most important rock band to emerge from Italy in the 1990s, although their career had begun the previous decade. Their energetic and extremely personal style made them huge success and caught the attention of critics, who immediately recognized the talent of their leader, singer/guitarist Manuele "Manuel" Agnelli. His multiple activities (musician, writer, producer, manager) played a pivotal role in the growth of the Italian indie scene. Formed in Milan in 1986 and named for a Velvet Underground song, Afterhours debuted two years later with a 7" released by Turin-based indie label Toast. The single included the tracks "My Bit Boy" and "To Win or Destroy." The initial lineup of the band was composed of Agnelli along with guitarist Paolo Cantù, bassist Lorenzo Olgiati, and Roberto Girardi on drums. The EP All the Good Children Go to Hell (recorded with new drummer Max Donna) followed two years later, to significant critical acclaim. Its mixture of Lou Reed influences and pop melodies gained some attention outside Italy, too, as indicated by a positive review in the English magazine New Musical Express. In the same year, Agnelli co-founded Vox Pop, which would be Italy's most important indie label through the first half of the following decade. Thanks to a positive review in U.S. magazine Alternative Press, Afterhours (with Girardi back on drums) took part in New York's 1990 New Music Seminar. At the end of the year, the band released its first album, During Christine's Sleep. In 1992, Afterhours returned with a brand new lineup -- Agnelli, Cesare Malfatti (guitar), Paolo Mauri (bass), and Giorgio Prette (drums) -- and a new EP, Cocaine Head, recorded with the help of Andrea Scaglia and Fabrizio Rioda, both from Ritmo Tribale. It included a cover version of King Crimson's "21st Century Schizoid Man." Then, with Malfatti and Mauri replaced by Xabier Iriondo and Alessandro Zerilli, respectively, Afterhours recorded their first song in Italian, "Mio Fratello è Figlio Unico," for the Rino Gaetano tribute album E Cantava le Canzoni. Pop Kills Your Soul, Afterhours' second album, followed in 1993, and showed a more personal side of the band, equally influenced by Velvet Underground, glam, and hard rock. After recording another song in Italian -- Ivano Fossati's "La Canzone Popolare" for the tribute I Disertori (1994) -- Afterhours decided to switch permanently to their native tongue. The first result of this change, Germi, was released in 1995, and included both new tracks and translations of old songs. One of those songs, "Dentro Marilyn," would later be covered by Mina with the title "Tre Volte Dentro Me," thus giving Agnelli huge visibility as a songwriter, too. From that moment on, the singer began a career as a producer as well, working with artists such as Cristina Donà, Verdena, and Massimo Volume. Because of Vox Pop's shutdown, Afterhours -- by then a trio composed of Agnelli, Iriondo, and Prette -- signed a deal with Mescal and in 1997 released Hai Paura del Buio?, one of the most influential Italian rock albums of the decade. The band's style was more personal and multifaceted than ever on the record, which included psychedelic and acoustic elements in its recipe. All of its 19 tracks became hymns for a whole generation of rock fans. In particular, "Male di Miele" is considered by many to be the Italian counterpart of Nirvana's "Smells Like Teen Spirit." For the following tour, the lineup was augmented by Andrea Viti on bass and Dario Ciffo on violin. Released in 1999, Non è Per Sempre showed their poppier side without blunting Afterhours' rockier edges, as documented by the title track, a heartfelt orchestral ballad. Right after its release, the band went on the road again with live-only guitarist Giorgio Ciccarelli. Those concerts are documented on the 2001 live album Siam Tre Piccoli Porcellin, which also included the new song "La Sinfonia dei Topi." That same year, Iriondo announced his decision to leave the band, and Agnelli organized the first edition of Tora! Tora!, a festival that for some years would become the most important event for the alternative rock scene in Italy. In the meantime, the singer had also published a collection of short stories called Il Meravigliso Tubetto. Released in 2002, Quello Che Non C'è showed Afterhours' most intimate and mature side yet, and solidified the band's success. In 2004, they shared a tour with Greg Dulli's Twilight Singers and released a rendition of Area's "Gioia e Rivoluzione" from the soundtrack of Guido Chiesa's movie Lavorare con Lentezza, in which they also appeared. Agnelli then guested on the Twilight Singers' album She Loves You and toured with them as a keyboardist both in Italy and in the U.S. This led Dulli to produce the next Afterhours album, 2005's Ballate per Piccole Iene, mixed by John Parish. Later that same year, One Little Indian released the English version internationally. Titled Ballads for Little Hyenas, it was supported by a long world tour. With the band now featuring Agnelli, Prette, Ciffo, Ciccarelli (now a full-time member), new bassist Roberto Dell'Era, and Mariposa's Enrico Gabrielli on sax, flute, and keyboards, Afterhours released I Milanesi Ammazzano il Sabato in 2008 with Universal. It was their most sonically adventurous work to date. The album included appearances by guests such as Dulli, Parish, Zita Swoon's Stef Kamil Carlens, and former member Cesare Malfatti. Their next release was an EP recorded at a handful of studios along Route 66 in the U.S. Meet Some Freak on Route 66 was released in early 2012, just before the full-length Padania arrived in April with yet another tweaked lineup. The double album Folfiri o Folfox followed in 2016 and, though far from their first hit, it became the indie stalwarts' first Italian number one. Its personnel included Agnelli, Dell'Era, and Iriondo, along with violinist Rodrigo D'Erasmo, guitarist Stefano Pilia, and drummer Fabio Rondanini. ~ Aurelio Pasini, Rovi