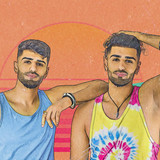 Singers, songwriters, producers, and DJ's, Twinbeatz are twin brothers born and raised in Chicago, IL, USA. The twins entered the music scene as DJs/producers in which they successfully became known as the #1 DJs across the world for the genre of Bhangra music. In 2018 Twinbeatz stepped into the world of singing and songwriting, taking their music careers in a new direction. Twinbeatz have accumulated well over 110 million+ genuine views across all major music platforms, alongside 240k+ subscribers on their YouTube channel. The twins interest in music stemmed from their father who had an extensive music library and was a part-time DJ since ’95. Their love and passion for music has continued to grow throughout the years. With knowledge, work ethic, and creativity, Twinbeatz managed to put forth a unique style for their music and brand. Being raised in America, but staying close-knit to their Punjabi culture and language, Twinbeatz have been successful in creating a style and sound of their own that fuses the two cultures. The duo is extremely popular amongst South Asian communities across the world. For this very reason, Twinbeatz have headlined and sold out tours/shows all over the globe for their fans.