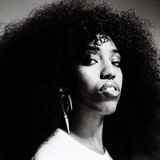 Having been singing since she was 16, 23-year-old Amber’s vocal sound is an androgynous blend both unique and powerful, citing Sade, The Police and Michael Jackson among her influences.   Growing up in East London and then moving to Hertfordshire in her early teens, Amber listened to funk and soul music throughout her childhood, a sound which has very much impacted her own, along with her discovery of 80's film scores and indie electronica artists such as Niki and the Dove and Metronomy.   In addition to her own material, Amber’s beginnings started with writing, landing herself cuts on the likes of Aquilo's debut album 'Silhouettes' and French artist Nekfeu's Diamond album 'Feu'. Followed by a spread of collaborations with artists Shy Luv, Franc Moody and Joe Hertz. Her previous singles ‘Mountains’ and ‘Taught Me Better’ were both supported by the likes of DJ Target and Twin B at 1xtra and received the accolades of New Music Friday and Best of the Week at Spotify and Apple, respectively.