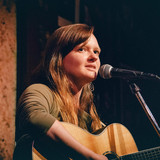 Rachel Marie is a cunning wordsmith, and precociously sophisticated. Clear and mature vocal production colors songs that are relevant, relatable, and far-reaching. The social awareness of folk meets the introspection of the singer-songwriter tradition with a moderate dose of snark. Rachel takes an unapologetically honest approach to songwriting in an effort to foster genuine human connection and encourage empathy through music. Passion for using the power of her voice to shed light on injustice gives rise to poignant poetic statements on subjects from heartbreak and death to police brutality and immigration. An endearingly quirky stage presence as honest as her songs keeps audiences charmed. Rachel’s first musical home in Boston was in early music, earning a master’s degree from the Longy School of Music and performing with groups such as the Boston Camerata, Eudaimonia, and Emmanuel Music. She is now planting roots in the Boston folk music scene, thriving on a supportive community of songwriters and building a musical home. The release of her next full-length album, False Foundations, is expected in the Spring of 2018. A Bethlehem, PA native, Rachel has made regular appearances at Musikfest and at acclaimed folk venue Godfrey Daniels where she has shared the stage with Antje Duvekot and the Kennedys. Rachel's November 2018 single "Looking for Light" was featured on the officially curated New Music Friday Christian Spotify playlist.