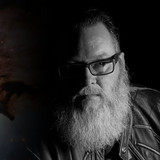 Keith Richie approaches composing and producing music with a sense of gleeful independence and resourcefulness that one might attribute to being born and raised in Texas. He has resided in a small town called Mesquite for the last 30 years, developing software, making music, and enjoying family life. Sporting a lustrous beard and a cowboy’s steady gaze, Keith traverses the worlds of Sharepoint computer software, music composition, and social media with a gentle ease. His YouTube persona is the Maestoso, a fitting Italian term indicating parts of musical scores meant to sound large, triumphant, heroic, and victorious, such as the Olympic Fanfare and Theme by one of his idols, John Williams. “If you were to take John Williams, John Carpenter, and Vangelis and put them all in the same room…what would the outcome be like?” he wonders. “Those three individuals have had the most influence on me, and I think that I pull the most inspiration from their work.” The Keith Richie signature sound is a mixture of electronica, symphonica, and progressive ambient. Early days of rock and metal fandom evolved into an appreciation of Tangerine Dream, Carbon Based Lifeforms, Enya, Deep Forest, Kraftwerk, and Christopher Franke. It follows that his albums stylistically range from Berlin-school, to film score, to ambient and chill-out. His current style of composition incorporates themes related to space or otherworldliness.