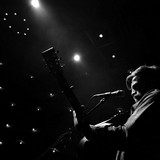 Deep, mature, surrounding, this is Dan Riverman. With an essence made of feelings, illusions, love and lovelessness, Dan started exploring the meaning behind his lyrics through an unique and profound voice, along with a delicate and passionate fingerstyle on his guitar. Throughout the years he recorded several songs that had great prominence in soap operas, movies and shows broadcasted on national television. After releasing the debut singles "Fragile Hands" and "Dark Haired Girl", the success of the EP “Hers” continues with the third single "Sea and the Breeze" along with a full tour through Portugal accompanied by Rui Materazzi (bass), Bruno Macedo (electric guitar), Jonas Araújo (piano, keyboards, hammond), Mike Peixoto (drums, percussion). In 2018, he released the single "Singing King" as a special tribute to his father. This song has been featured on TVI's soap opera soundtrack, "A Teia". In early 2019 he accepted Miguel Guedes’s invitation to sing his song “Lava” at the Festival RTP da Canção, by the end of the year he released “Alright” as the first single of the new album. He is currently recording his next album, revealing a more pure, raw and intimate version of his songs. Reaffirming himself as an independent singer, he continues to work with the same musicians who formed the band previously and other guest musicians. On the 21st of May, he released "Step Outside" as a single of the new album that’s coming out on September 2021.