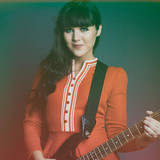 Janelle Loes is an award-winning singer/songwriter who knows how to spin a song and mesmerize an audience. Poetic, bold, and convincing, her songs seek definition from life as they carve their own path, make their own rules, and delve deep to carefully unearth the light in dark times. An accomplished finger-style guitarist, pianist, and vocalist, Janelle captivates audiences with her rich versatility, evocative sound, and charming presence.