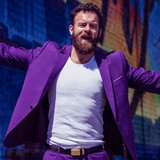 Mutts frontman Mike Maimone “goes from zero to a hundred quicker than most,” according to Daytrotter. Choose Chicago says, “He plays the piano with his feet. He swills whiskey between songs. He shouts and howls. He is an unstoppable music force.” Vern Hester of the Windy City Times adds, “The man has the keyboard style of Fats Waller and Jerry Lee Lewis combined.” His solo music is inspired by other piano-playing singer/songwriters like Dr. John, Leon Russell, Randy Newman and Tom Waits. His 2008 debut album, recorded and mixed by Manny Sanchez, drew production influences from indie artists like Ben Folds Five and Elliott Smith. Releasing The High Hat Club EP in 2018, Maimone has returned to his solo project after a decade spent contributing to other artists. Now recording and mixing his own music, he seeks to merge his piano-player roots with production influenced by Mark Ronson, Pete Rock, and Mario Caldato Jr. As a performer, Maimone has averaged over 100 tour dates each year since 2007, primarily with his band Mutts and as a solo artist, as well as on keyboards for Company of Thieves and Los Colognes. He has toured supporting bands including OK Go, Blues Traveler, Murder By Death, and The Hold Steady, played Lollapalooza, Sasquatch, Riot Fest, and at notable venues across the country. You can subscribe to Mike on Patreon (patreon.com/mikemaimone) to support his work and get exclusive content from all of his projects, which are released on his label 8eat8 Records.