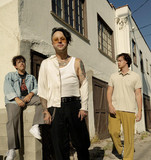 lovelytheband translate emotions, anxieties, and feelings into lush, layered, and lively indie pop anthems. When the band was founded by lead singer Mitchy Collins, guitarist Jordan Greenwald and drummer Sam Price in 2017, the trio maintain a lasting connection to listeners by holding nothing back. “I really believe the importance of songwriting is saying something when someone else doesn’t know how to,” affirms Mitchy. “In the songs, I’m talking about life, trials, tribulations, depression, anxiety, and shit I deal with as well as the headaches that come along with the good and bad days. My problems don’t define me, but we should embrace every side of who we are." This message immediately resonated among audiences everywhere. A centerpiece of the everything I could never say… EP, the group’s debut single “broken” caught fire as “the longest running #1 track on Alternative Radio thus far in 2018” with six weeks at the top. In under a year, it amassed 25 million total global streams. BuzzFeed summed it up as “So. Damn. Good.”Billboard proclaimed the group among “10 Rock &amp; Alternative Artists to Watch in 2018” as they supported Vance Joy and AWOLNATION on tour. Everything paved the way for the arrival of the band’s first full-length, finding it hard to smile [RED MUSIC]. Produced by “broken” collaborator Christian Medice, these 16 tracks entrance, engage, and enchant with cathartic, compelling, and catchy choruses.