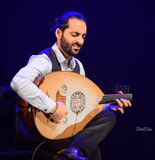 with his brothers forming LE TRIO JOUBRAN, Adnan has travelled the world performing in various renown festivals, theaters & music halls. At the age of 23 he perfomed at the Carnegie Hall, Olympia, Radio City Hall, Salle Pleyel, and Theatre de Champs Elysees, and more...   Adnan’s albums with Le Trio Joubran have won numerous prizes and awards. They have been chosen to compose music for award winning and Oscar nominated documentaries and films such as Le Dernier Vol, Adieu Gary, won best Music for Films award in Dubai International Film Festival (DIFF 2011). The Last Friday, won best Music for Films award in DIFF (2012) and finally the infamous Oscar Nominated Five Broken Cameras (2013). They have topped the World Music charts in France with a Number 1 Album and have been privileged to collaborate with many artists such as the late Mahmoud Darwish, Dhafer Youssef. Adnan has also featured as a guest for Ibrahim Maalouf and Rodrigo & Gabriella, and collaborated with ROGER WATERS , BRIAN ENO, A. R. Rahman and more.   After 10 years of Parisian life, Adnan has created his own musical identity alongside his ongoing project with the Trio. Whilst respecting the traditional way of playing the oud he has followed his passion desire to propose something different and new. With these experiences and challenges, Adnan has created his debut solo album, Boarders Behind, expressing through music, his new identity of compositions, rhythms, virtuosity and feelings.