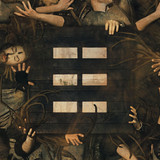 TERRA's construction work started in Rome, Italy, around 2014. It took the crew four years to shape and tune the fabric of the project, mixing together metal and alternative materials with a heavy tribal style. The guys are longtime friends. Daniele Zed Berretta and Lorenzo JB Saponetta are on the same boat since they met in their teen years, while Paolo Luciani and Stefano Alfonsi joined them around 2006 to form the 7 Times Suicide. After a couple of worldwide expeditions and supporting other vessels such as Funeral for a Friend, Boysetsfire, Poison The Well among many others, the four-crew members turned to new landscapes. TERRA was launched on the 1st of March 2018, their first track was Close Enough. It immediately drew attention to the Italian scene, with radios intensively airing it after its 800 people launch event. TERRA's crew believes that to cope with the times we live in you need to be able to craft everything on your own. That’s why everything you can see or hear on board directly stems from the crew itself. They fixed new tracks on the map and never stopped moving forward since, touring Italy and Europe and gaining over 500.000 streams on Spotify during the first year, steering the boat toward new lands. Right now, TERRA sails in fair winds on a tight schedule, charting track after track the course to their next journey. Steady as she goes.