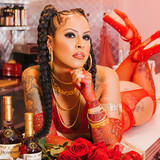 Reverie was raised by a hard working, single mother in Northeast Los Angeles with her 2 brothers. She began writing poems and short stories as soon as she learned to spell. Reverie frequented the school counselor, detention and was suspended often. Despite her behavioral issues, she maintained good grades and got her poetry and art published. At 12, Reverie discovered ‘underground hip hop’ and her poems transitioned into raps. In high school, Reverie obsessed over graffiti, which lead to her first arrest and fights, which eventually got her expelled from school. She began kicking it with a gang and abusing drugs to mask her depression. Louden, her brother and now producer, was selling crack to feed his heroine addiction, got stabbed and was sentenced to 1 year in a juvenile detention center shortly after. In hopes of a second chance at life, the family moved to Washington- where they began to record music together. In 2009, they released Reverie's first mixtape ever, 'Castle In The Air,' using a $15 karaoke mic and a clothes hanger as a mic stand- in Louden’s closet. 9 years and 10 chronicled projects later, Reverie regularly tours all over USA and Europe and has dedicated fans around the globe. She and Louden still record music together regularly and have cultivated an organic, cult-like following, which they call the 'Satori Mob.’ Hip hop saved their lives.