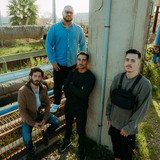 The band Allamedah was created in 2015 by David Bitton Coutinho (guitarist/vocalist) and João Faria (drummer). In 2015 the band recorded a song titled "Rio", with their first bassist Wilhelm Lindh, in order to get the attention of other musicians to join the band. In early 2016, guitarist Tiago Marinho joined the band, completing the lineup. In that same year, the band recorded a five track EP, with tracks such as "Rio", "Red Flag", "Desnudar a Alma", "Behol Nehsima" and "Symphony". In late 2017 the band recorded new songs, that would better define their sound essence. All these tracks, including "Algema", "Open Field" and "Infamous", were released during the following year. The band is currently in the studio recording tracks, set to be released during the year of 2020. Allamedah cites Trivium, Bring Me The Horizon, Sevendust, Linkin Park, Avenged Sevenfold, as their main influences. Their sound can be described as a mix of the aggressiveness of Heavy Metal with the depth, beauty and melancholy very much present in the portuguese culture, without leaving aside more modern influences. Current lineup is David Coutinho (guitar/vocals); Tiago Marinho (lead guitar/programming); João Faria (drums); Johnny Jow (bass).