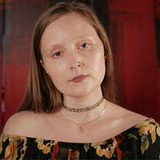 Bellabeth is an independent Austrian Dark/Indie-Pop singer-songwriter and producer. After growing up outside a small city surrounded by the alps, she spontaneously bought a plane ticket after her high school graduation and flew to Europe‘s live music capital: London. She stayed there for 1.5 years where she worked and gigged with several musicians while writing and producing songs on her cheap laptop. She gained a small following on YouTube by uploading her (initially unmastered) originals and covers. Since then she’s moved to Munich and worked remotely with other producers and songwriters from around the world. Recently, she’s put more focus on her own production skills, hoping to be less dependent on producers and more capable to self-realize her artistic visions. Her album Applied Anxiety was completely self-produced. Vocally, she likes to create a strong, melancholic low sound and her main lyrical themes revolve around mental health, interpersonal relationships and female empowerment. Her songs mainly combine dark instrumentals with intimate vocals but sometimes she crosses into uptempo pop territory. Follow Bellabeth to stay up to date with her latest releases!