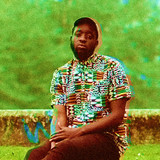 Home is a slippery concept for Jonah Mutono. The musician who records as Kidepo was born in London before his parents moved to Philadelphia; the family returned to their native Uganda nine years later after struggling to find a sense of belonging in the United States. When he was 13, Mutono was shipped off to attend school in England, where he stayed until he was 22. “When people ask me where I’m from, I don’t know what to tell them,” he sincerely states regarding his upbringing. The launch of Mutono’s recording career was inspired by a forced return to Uganda, and resulted in the singer/songwriter/producer's debut EP, Reunion. A sense of displacement and transience marks the five songs collected on the EP, a musical document so intimate it practically leaves a mark. The EP's sonics are unbeholden to a specific sound, and encompasses full-bodied mix of electronic and acoustic components employing a sonic palette of purples and blues that amplifies the purity of Mutono’s own soul-searching. Following Reunion, Kidepo has started on a string of single releases, including “August in New York" and "Be A Man (Get in the Cold Shower)". Exuding confidence, the singles represents the artist’s grasp of an expanding, more confident sound while keeping the same vulnerability that attracted listeners to his first offerings. In 2018, Kidepo will continue to release new songs and videos, while also further honing his live set with shows planned for both the US and Europe.