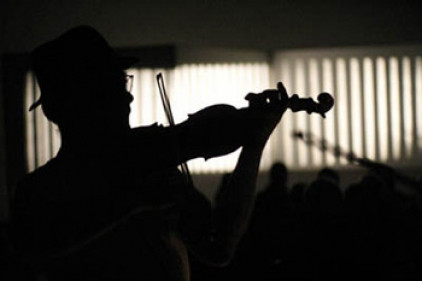 A pioneering force behind the evolution of minimalism, violinist and composer Tony Conrad introduced the idea of "Eternal Music," a droning, mesmerizing performance idiom which employed long durations, amplification and precise pitch to explore new worlds of sound; through both his solo work and through collaborations with artists including LaMonte Young, John Cale and Faust, he forged new creative directions which proved enormously influential on successive generations of artists ranging in background from pop to the avant-garde. Born in 1940, Conrad studied music at Harvard and, by the early '60s, became immersed in New York's burgeoning underground music scene; there he first joined forces with composer/saxophonist LaMonte Young and the young Welsh musician John Cale, with whom he formed an ensemble variously dubbed the Dream Syndicate and the Theater of Eternal Music. Sustaining notes for hours at a time, their improvised dissections of specific harmonic intervals rejected the compositional process, instead elaborating shared performance concepts. The Dream Syndicate disbanded in 1965, with Conrad, Young and Cale all later staking claim to authoring of the "Eternal Music" aesthetic. Still, Conrad continued collaborating with Cale, though he also channeled his energies into filmmaking. He directed several features (The Flicker, Film Feedback), and also composed their scores. By the early '70s, Conrad began recording with members of the nascent Kraut-rock scene, resulting in the 1973 Faust collaboration Outside the Dream Syndicate, his first-ever proper recording. However, he largely abandoned performing to teach at the University at Buffalo. Finally, in 1993, he performed with Faust at a music festival recorded Slapping Pythagoras two years later. In 1996, he issued Four Violins, a piece dating back to 1964. A year later, Conrad released Early Minimalism, a four-disc collection including not only the aforementioned Four Violins but also newly-recorded recreations of vintage Dream Syndicate performances.