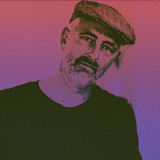 Weeland aka Patrick Wieland is a German based Guitarist/Songwriter/Producer with a life-long love and passion for soul and rhythm and blues music. His guitar sound is influenced by John Lee Hooker, Albert Collins, Johnny Guitar Watson but he also likes the great rhythm player like Al McKay, Nile Rodgers, Prince, David Williams and David T. Walker, so Disco and Funk also had a big influence on him. Weeland released 2 albums, his first debut album was released in 2006 " Nachhaus Zurück ". A neo soul influenced record with all German lyrics featuring singer Ralf Damrath. In 2011 weeland released " the golden sessions " featuring his urban soul collective. An international affair with Esther Cowens, Brandy Butler, Mika Doo, Raphael Jacob and trumpet player Joo Kraus at its core,

released by the French label Soul Lab. Weeland clearly has an innate grasp of what goes into making a real soul record. It's obvious that he understands about the technicalities but it's equally clear that he's aware of the more intangible elements - like passion, commitment and feeling. This record is best described as rooted in the past without being a retro pastiche - it's proper modern soul music. Since 2019 weeland is an independent artist and on his upcoming productions you can hear all the music, he has been working on over the last years. Needless to say weeland is an artist to watch in 2020.