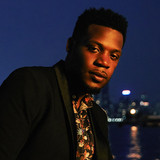 KEYON HARROLD Perspective’s something Keyon Harrold has in spades. Hailed as “the future of the trumpet” by Wynton Marsalis, the GRAMMY-winning musician was born and raised in Ferguson, MO, the St. Louis suburb that tore into America’s national consciousness in 2014 with the police shooting of Michael Brown. The unarmed teen’s death, as well as the bitter protests and riots that followed, weigh heavily on Harrold’s stunning new album, ‘The Mugician,’ but the record examines our troubled times through a far wider lens than any one tragedy, combining cutting, insightful lyrics and spoken word passages with evocative, often-heartbreaking musical arrangements to paint a portrait of a deeply divided nation, one still grappling daily with the raw, open wounds of discrimination. It’s a difficult record to categorize; sweeping and cinematic, the music draws on elements of jazz, classical, rock, blues, and hip hop to create something uniquely modern and unmistakably American. Guests from across the spectrum including Pharoahe Monch, Gary Clark, Jr., and Robert Glasper add to the record’s eclectic nature, but it ultimately triumphs as a unified, cohesive whole both because of Harrold’s virtuosic skill as a trumpeter and songwriter and because of his relentlessly optimistic belief in brighter days to come. These are songs of longing and ache, to be sure, but they’re also songs of hope and desire, of faith in the future and in his fellow man.