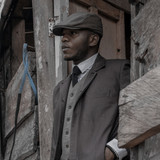 Growing into a family immensely involved in the choir, it's quite certain that Daniel Sotonye Wakama, professionally known as Boblee, was destined to be a musician and the decision to make music kicked off at the young age of 9 when he started writing short verses using ringtones from his mother's phone. Boblee, currently a 300lv student of Physics With Electronics at Redeemer's University, is an Afro-fusion singer and songwriter based in Lagos State best known for his versatility in infusing Afrobeats with his urban pop sound. In 2015, he started making music - recording music, songwriting, and putting more effort into his creative process. On getting into the University, he started building an audience by putting out songs like “Fly Away” & “Funmi” which were released in 2018 followed by a couple of more experimental records (“Desire” “Deja Vu” & “Fine Face”) in an attempt to build his fanbase in 2019.

In 2020, Boblee debuted his first official single “Temperature” on all platforms that has so far amassed over 25,000 streams across all platforms. He has since gone on to become one of the most respectful and influential artiste in his school. He has also been involved in the performance culture with appearances at The Stew Festival, The Culture, some school events, and more.