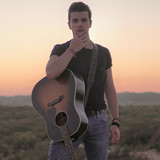 Born in Madrid (Spain), Marcos Cabanas is a native of Rolle (Switzerland) - town in which he first picked up a guitar. Heavily inspired by the likes of Bruce Springsteen, U2, and more recently Chris Stapleton, Cabanas writes about the life and struggles of the common man, inhabiting positions in middle-class, American culture. In a mix of Southern and Heartland Rock, Cabanas was nurtured with the music of older generations, from where his distinct sound has developed. At only 21 years old, Cabanas has already released three studio albums, including "The Godfather" (2017), and "Solitary Nights" (2018).   After a 'semi-break' from music in 2019, when he left his native Switzerland to pursue an engineering degree in the Netherlands, Cabanas released his third album, titled "From the Town of Lincoln, Nebraska", on December 4th 2020. Inspired by the music of John Prine, Colter Wall, and Townes Van Zandt, the acoustic album was recorded in an intentionally lo-fi setting to capture a melancholic feel - an homage to Springsteen's "Nebraska".   More info: https://marcoscabanas.com/