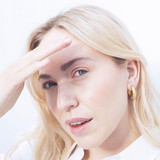 Margaret Berger has been active in the music industry for over 15 years. Her debut dates back to 2004 with the release of her album Chameleon, which earned her two Norwegian Grammy nominations; Best New Artist and Best Music Video of the Year. She won the award for Best Music Video for her Lifetime Guarantee Video. Her next album, Pretty Scary Silver Fairy (2006) took a more electronic turn and we saw a more electronica-inspired Berger with songs like the album’s hit Samantha. Two years later she again became a subject of conversation with her contribution in 2013 Eurovision Song Contest where she performed the song Feed You My Love. With great confidence, she established herself as a great artist and performer with versatility to own any stage, it be Eurovison, the underground club scene or massive festival stages. After a couple of years out of the spotlight Margaret Berger surprised us with a release of her single Se Deg. 2020 was the year when she went back to her roots and released music in her native language. She is currently focusing on her songwriting in Norwegian and finishing up more music to be released.