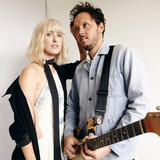 Gungor are a baroque pop, folk, and experimental rock-influenced collective centered on the husband-and-wife duo of Michael and Lisa Gungor. Although Gungor grew out of a Christian musical background and have often included spiritual concepts in their music, they do not consider themselves a CCM band. Raised in Wisconsin, Michael spent his formative years leading worship services with his pastor father. He attended Oral Roberts University (where he first met fellow musician Lisa) and later studied jazz at Western Michigan and North Texas universities. Eventually, Michael settled in Michigan and joined the teen ministry Acquire the Fire. It was there that he formed the self-described "liturgical post-rock" outfit the Michael Gungor Band and began releasing albums, including 2003's Bigger Than My Imagination and 2006's Ancient Skies. After marrying, Michael and Lisa relocated to Denver, Colorado and founded a community of believers called Bloom. During that time he also shortened the band name to Gungor, releasing the album Beautiful Things under the new moniker in 2010. The intricate Ghosts Upon the Earth arrived the following year and earned two Grammy nominations, for Best Gospel Song and for Best Rock or Rap Gospel Album. Gungor returned in 2011 with the concert album Creation Liturgy: Live. In 2013 Gungor released their fifth studio album, I Am Mountain. ~ James Christopher Monger, Rovi