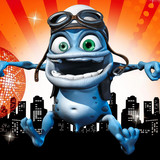 Crazy Frog's popularity peaked in the summer of 2005 when the full-length single of the "Axel F" ringtone which was created by members of the German production team Reinhard Raith and Henning Reith and which is based on Harold Faltermeyer's instrumental theme for the movie Beverly Hills Cop topped the U.K. singles charts for several weeks. It was so popular that it kept Coldplay's comeback single `Speed of Sound´ from debuting at number one. Later that year, the release of the full-length album ´Crazy Frog Presents Crazy Hits´ marked the Crazy Frog's arrival in the US. In 2006, the Crazy Frog phenomenon was still going strong in Europe, with toys and gadgets available. That summer, the Frog dropped another album, aptly named More Crazy Hits. And in 2009 the third Crazy Frog album arrived in the shape of ´Everybody Dance Now´ which included the singles "Cha Cha Slide" and "Daddy DJ". Then it got a bit quiet about the Crazy Frog but in 2014 and 2015 the Crazy Frog suddenly got popular again on Youtube and is now one of the most popular artists on the platform : http://www.youtube.com/c/CrazyFrogOfficial