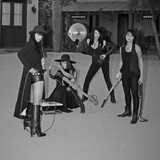 THE DARTS exploded onto the scene in 2016 with a fiercely classic sound that invests deeply in late 60’s garage, with shadows of horror pop and tinges of psychedelic rock - the perfect act for the Bride of Frankenstein's bachelorette party. Following the end of their band The Love Me Nots, vocalist/keyboardist Nicole Laurenne (The Love Me Nots, Motobunny, Zero Zero) and bassist Christina Nunez (The Love Me Nots, The Madcaps) decided to put together the all-girl band they had been talking about for years. Tapping some of their favorite players for the project, like drummer Rikki Styxx (The Two Tens, The Dollyrots, Thee Outta Sites) the band wrote and released two EPs. Within months, UK garage label Dirty Water Records came knocking and in 2017 released the first full-length, Me.Ow., to international acclaim. THE DARTS have crisscrossed the US and Europe ever since, including performances at major festivals. In 2018, Jello Biafra's legendary punk label Alternative Tentacles Records joined forces with Laurenne's newly formed American arm of Dirty Water Records to release THE DARTS first 7”. The Darts have performed with Black Lips, Joan Jett, The Living End, The Dwarves, and Turbonegro and backed both Biafra and Dwarves' frontman Blag Dahlia on stages. In Fall 2018, THE DARTS supported legendary act THE DAMNED on a nationwide US tour, with the addition of guitarist Meliza Jackson. AT will release their new album May 24, 2019. Preorder now! www.alternativetentacles.com.