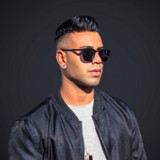 Music Tells A Story Ahzee has redefined the EDM genre by bringing his unique style and sound to his music and mixes that is sure to get any crowd moving. His music is filled with many Mediterranean influences and his own South American culture.   Guyanese born but New York raised, he has set the bar on what it means to keep pushing for your dreams. He started simply playing at small bars and quickly moved past that stage to also doing music production. He ignored all those who said he couldn’t live his dream and taught himself how to produce, master and create his own sounds that today are played all over the world.   Ahzee, is well known for many of his songs that have topped the charts in various European countries and continues to be played around the world. He has produced the smash hit King, But a lie, Burn it Down, Go Gyal and more recently released his first album which will showcase 17 epic Ahzee styled tracks.   In the DJ department Ahzee has been traveling the globe with gigs across France, Belgium, Netherlands, Switzerland, Turkey, Tahiti, Mauritius, China, Thailand and many other countries. Definitely keep your eyes peeled for his future music that is sure to be epic!   Follow Ahzee Instagram @kevinahzee