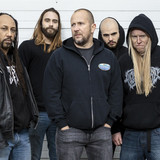 Death metal band Suffocation were formed in New York in the early '90s, comprising vocalist Frank Mullen, guitarists Doug Cerrito and Terrance Hobbs, bassist Chris Richards, and drummer Mike Smith. The group's 1991 debut album, Effigy of the Forgotten, became quite influential in the grind/death metal community. Released on Roadrunner Records, it was followed two years later by Breeding of the Spawn. After the release of the Human Waste EP, Smith left Suffocation and was replaced by drummer Doug Bohn. By 1995, the second lineup had issued its first album, Pierced from Within. The band broke up soon after, disheartened by label problems and lack of direction. A mystery album, Despise the Sun, floated around due to record label politics until Relapse finally released it in the summer of 2002. The band re-formed in 2003 and began working on its fourth studio album. The resulting Souls to Deny, which marked the return of original drummer Mike Smith, arrived the following year, and effectively ended the group's six-year hiatus. Suffocation's eponymous fifth outing saw release in 2006, and was followed in 2009 by Blood Oath, which marked the band's first official entry in the Billboard charts. Pinnacle of Bedlam, the group's seventh studio album, arrived in 2013. By 2017, when Suffocation released ...Of the Dark Light, Frank Mullen and Terrance Hobbs were the only constant members of the band, spanning its full history. The album also included bassist Derek Boyer, who had been with the group since 2004, and guitarist Charlie Errigo and drummer Eric Morotti, both of whom joined in 2016 and made their recording debut with Suffocation on ...Of the Dark Light. ~ John Bush, Rovi